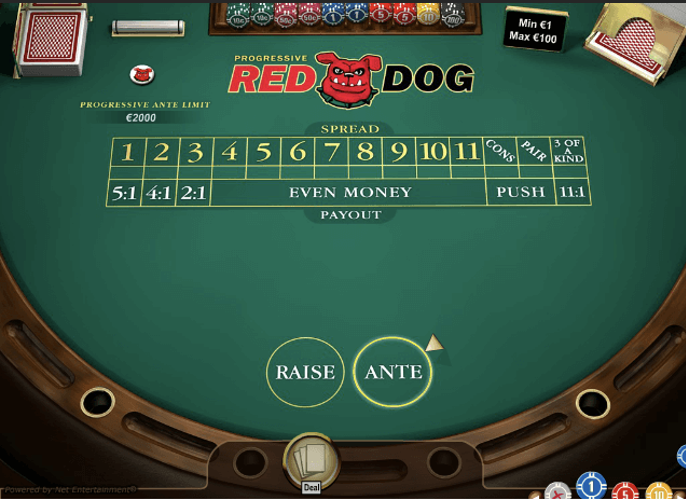 What used to be a casino classic has now been reduced to a fun game mostly played between friends at home. Sometimes called “Yablon,” red dog is the simplest of all table games.  Like in the regular poker game, the players use a deck of fifty-two cards, ranging from Aces to Twos. Interestingly, two to ten people can enjoy the red dog game for real money. Here are a few things that you need to know about the game.

How Red Dog is Played

Red Dog is almost a community game. Everyone bets on the same outcome, which is quite basic too. At the start of the game, each player is expected to place an ante bet. The ante bet is a chip placed at the center of the game table to form a pot or a pool.

After the pot is formed, cards are drawn to determine who the dealer will be. All cards are drawn face up, and the player with the highest card value becomes the dealer. As per rules, two cards are dealt to each player, and for a player to win, the next card that the dealer must draw must be higher or equal to the value of the hand that player holds.

For example, if a player holds a 4 and a 9 card, the player wins if the dealer draws 5, 6, 7, or 8 cards. There are many other variations of the red dog that may differ from home to home and from casino to casino.

When a player has successfully won a round by showing they have ranking cards or a higher rank than the one dealt out by the dealer, they retrieve their winnings from the pool or pot in the sum of their bet and an additional equivalent of the bet.

Therefore, the pot must never run dry. The chip must return to the pot for every bet taken out of it. Players with no matching hand are usually used in filling the pot as they must place the equivalent of the bet into the pot.

Other Variation of the Red Dog Game

The classic variant of the red dog is exactly as explained above, as it is very simple and straightforward. Online casinos, like Spin Casino, known to play host to many lesser-known games, also stick to the above variant of the Red Dog game. However, there are many variations that other casinos explore to keep the house edge to the best advantage of the casino and offer customers many options. Other variants include:

The objective of this variant is clear. There is no middle-rank here, and for a player to win, they must have a higher hand but the same suit as the dealer’s. The dealer deals out four to five cards, depending on the number of people playing.

The dealer later draws a community card that the players must match. This variant entirely removed the in-between element that may have made many winners emerge. There can only be one possible winner in the high card pool, where only one deck is used.

This is a variant of Red Dog that uses five cards, and players are required to add a bonus bet. It is one of the earliest variants played as far back as the 1970s. You can either raise your bet, stay, or surrender to this variant. You may even double your bet as the action unfolds if you are ready.

This is a variant that is largely based on predictions. This means that players can bet on whether the community card dealt by the dealer is specifically going to be higher than a certain value or lower than that, instead of the traditional in-between element that is usually obtainable.

When compared to other casino games, Red Dog is very simple to understand and easy to play, with a less than three percent house edge and more than a ninety-five percent return to player percentage. The real tricks depend solely on understanding how to calculate the spread of the cards logically.

The tighter the spread, which is the ability of the community card to fit into the cards already dealt to the players, the better the payout will be. The correct understanding of calculating the spread will let you know when to fold or raise your bet and maximize potential earnings from the game of red dog.